I love the sound of this book! I have it queued up on my Kindle to make sure this one gets read before Christmas and at 99 pennies it makes it totally affordable! 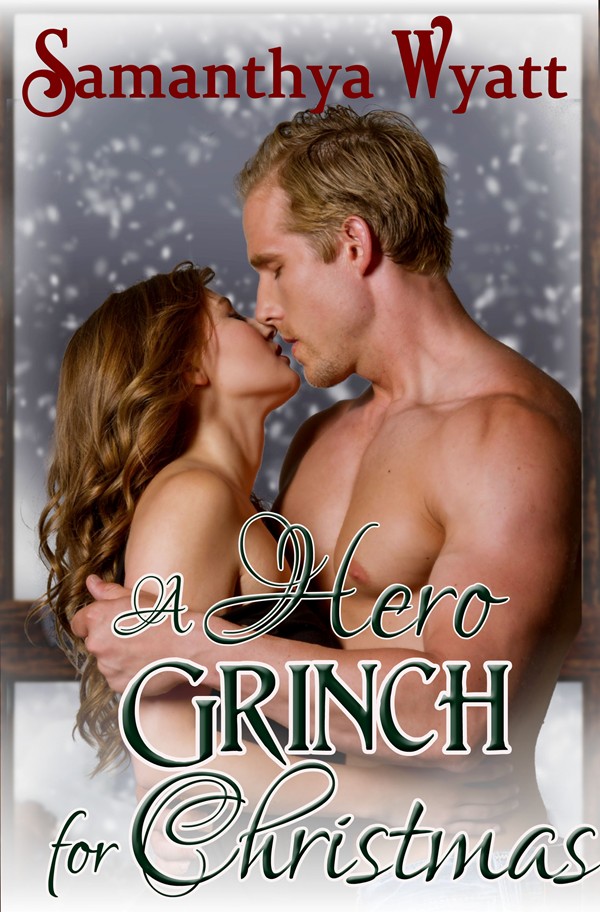 Dani will not allow The Grinch to hide from Christmas. She will cure Hunter of his nasty mood, even if it kills her. But who will save her from his passionate kisses.

War hero, Hunter Armstrong, has seen enough devastation to last a lifetime. At the end of his latest Army term, he accepted his discharge papers and never looked back. His uncle’s home is tucked away in the majestic mountains, a perfect place for him to hide from Christmas and his own memories. But he can’t hide from the delectable Dani. The last thing he needs is a female in his life. But this one has the face of an angel and eyes you could drown in.

Dani Wimer left the Colorado Mountains and relocated in the bright lights of New York City. Every December she returns to the village of Wyattsville. When a hunky military guy enters her aunt’s shop, he seems lost and angry. His scowl is intimidating, but that doesn’t bother the spunky girl who celebrates the holidays like it’s Christmas every day. She decides to put a smile on his Grinch face and ends up losing her heart in a passionate whirlwind.

Enjoy an excerpt from

A Hero Grinch for Christmas.

The door flew open and Hunter’s blond hair hung in his face, as if maybe he just got out of bed. Her fingers itched to smooth the wild strands from his brow.

When he recognized her, he simply hooked his thumb in his pocket and leaned against the doorjamb. Rugged in a pair of faded blue jeans, his too tight t-shirt stretched across six-pack abs. His stunning blue eyes peered at her, causing a slow kindling in her belly. She took in a ragged breath and said the first thing that came to her mind.

“I hear it does that up here,” he said. His gaze glided from her face down to her shaking knees.

“Can I . . . come in—” She stuttered, out of breath. Besides the snow and cold temperature, she’d fought the wind every step of the way and—. She swayed.

His arms shot out to steady her. Then he swooped her up and cradled her against his hard chest.

“My God, you’re freezing. What the hell happened?” Kicking the door shut, he carried her to the fireplace and lowered her to the ottoman.

“I had to walk from the main road.” Her voice came out shaky. She’d kept her mouth covered with her scarf, but her lungs burned from breathing the cold air.

“Where is your car?  How long have you been out there?”

“Why didn’t you say something?”

He worked the buttons on her coat, then removed the gloves from her frozen fingers. He helped her remove her coat, then he tossed it aside. “Are you all right?” He gripped her arms, sliding his hands along her elbows descending to her writs.

“Are you injured? Do you have any pain?” His warm fingers caressed her neck, then smoothed over her shoulders, almost massaging. Warmth flowed through her.

He gave a long steady stare. “Did you hit your head?”

“Whatever possessed you to walk in this weather? Do you realize you could have frozen out there and no one would have known? You could get frost bite.”

He squatted and tugged her boots off, dropping them to the floor. Then his wonderful fingers warmed her toes through her cold socks. “Where’s your car?”

“About a mile back, at the big curve, right before the turnoff to the cabin.”

He grunted and shook his head which she’d come to believe was his usual habit. She could ignore his surly disposition, but her body temperature rose several degrees from his strong hands rubbing up and down her legs.

“What the hell are you doing out here?” he asked.

The fire was welcoming, him not so much.

“Bringing gifts. Uh, there’s a box outside your door. I thought you might like a home cooked meal.”

“Are you serious? You decided to drive up this mountain in this weather to feed me?”

“It wasn’t snowing when I left. For some stupid reason I had this wild idea I was performing an act of kindness,” she said sarcastically.

Hunter strode back to the entryway and found the box of food. She studied his tall form, as his long powerful legs ate up the distance to the door. He had a confident swagger a girl couldn’t help but admire. When he retrieved the box and passed her heading to the kitchen, she couldn’t resist one more sneak peek at his ass.

He placed the box of food on the counter. And in no time, he was back at her side, pulling her to her feet. While one hand gripped her arm, he pressed the other to her forehead.

“Can’t keep your hands off me?” she teased.

Samanthya lives with her husband in the Shenandoah Valley. She left her accounting career and married a military man traveling and making her home in the United States and abroad. Once she found historical romance novels, she couldn’t put a book down, and one day decided to create a story of her own. Her dream of being published came true with Soul Mate Publishing. She writes historical and contemporary romance.

She relishes the challenge of penning a story with strong characters, a bit of humor, and active scenes while creating new characters and bringing them together in a romantic tale. It took years of writing, joining RWA, joining chapters, entering contests, submissions & rejections which created the author she is today. By keeping her spirit and turning criticism into drive she has achieved her career as a published romance author. Samanthya loves to travel with her husband and a book is a constant companion.