I am so happy to have Stacy Hoff on here today. I love her books! They are so good! Jockeying for you will not disappoint, you need to read this one for sure 🙂 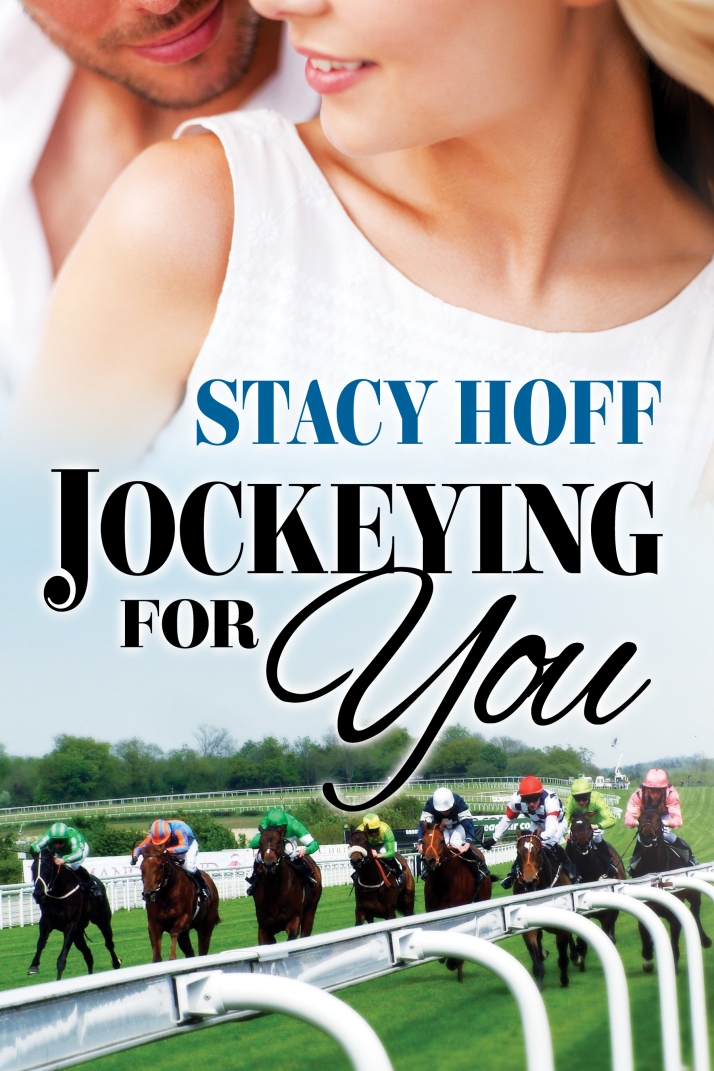 Jake Carter is on a mission—to prove his family wrong. He may have bought a troubled horse, but he’s hired Ryder Hannon, a “horse whisperer,” to get his horse back on track.  She’s more than just a trainer to him, she’s the woman he’s been looking for.

Ryder Hannon, a thoroughbred horse trainer, has a big problem—fighting her fear of racing again. Her emotional scars run deeper than her physical ones. But her romantic feelings towards handsome, uber-rich, stable owner Jake Carter is a bigger problem.  Is Jake truly in love with her or is he using her to get back at his smug family? ­

When Jake’s jockey gets injured, he wants Ryder to race. He knows deep down she wants to live up to her family’s legacy. So why does she keep fighting him—and her destiny—so hard?

Jake felt his eyebrow arch up. “Dr. Doolittle, I presume?”

A slow smile spread across her lips.

“How far have you gotten with Handsome?”

Jake’s eyebrows shot up to his hairline. “My God, Ryder, you’re amazing,” he exclaimed. With a shake of his head and a hard cough he corrected himself. “I mean, your results with him are amazing.”

Ryder’s grin was now Cheshire cat sized. “Thanks for both compliments.”

Then it hit him. His comment was a slip, but was it really a mistake? Her beautiful face, which had been beaming with pride now had a shy aspect that was even more endearing. She bore a schoolgirl’s blush and averted her eyes from him as she busied herself petting Handsome’s nose.

If only she could stroke me the same way. Though somewhere lower down than my nose. He tensed at the thought. Focus, Jake, damn it! This is business. “Show me,” he said.

She blinked. “Show you what?”

“Show me Handsome Dancer can be ridden. I want you to ride him for me.”

“Now? He’s already had his exercise for today. I don’t want to tire him out.”

Handsome’s head batted her shoulder with a determination that was comical.

“You know,” Jake quipped, “if he actually understands you then you really are Dr. Doolittle.”

“I’m sure he just wanted me to give him an apple.” She wiped a stray blond bang from her hot forehead and looked the horse in one of his eyes. “What are you saying, babycakes? That you want to go on a short ride with me?”

Yes, yes, I do. Jake cleared his throat and gave her a tight smile. “Go ahead, you two. Impress me.”

A few minutes later, he was outside the training track, his hands casually resting on the guardrail while he waited for the show to begin.

Soon, Ryder and Handsome entered the track. He heard her cluck her tongue at the horse, and then watched her lightly kick Handsome’s rear. The horse took off around the track in a fast gallop. The horse’s flight was fluid and astoundingly fast for what was supposed to be an easy go-around. She was doing more than merely riding Handsome Dancer. She was a part of him. One cohesive whole.

Thinking the demo was about to end, he had almost turned around to head back when something caught the corner of his eye. It was a flash of color, a fast burst of brown. What the . . . ? Whipping his head around to the source, he stared open-mouthed at the sight. Handsome Dancer was bolting down a stretch of training track at a speed unheard of for a newbie horse. Or maybe any horse. In all of Jake’s experiences, he doubted he had seen a horse move that fast when not performing in an actual race.

Stacy Hoff is a contemporary romance author, as well as an attorney. She has practiced law for two decades, primarily handling contracts. Romance novels have always been her secret passion. She writes her romantic stories until the wee hours of the night. Stacy lives in New England with her husband and two boys.

One thought on “Jockeying For You by Stacy Hoff”