Happy October 26th! We continue Halloween week with another true ghost story from E. Ayers! This is a good one and I hope you all enjoy it as much as I did.

After the ghost story E tells us about her latest release A Skeleton At Her Door. It sounds like a great read for Halloween week and I can tell you it is cued up on my kindle as we speak! It’s also on sale this week!!

Without further ado we welcome E. Ayers and her ghost … 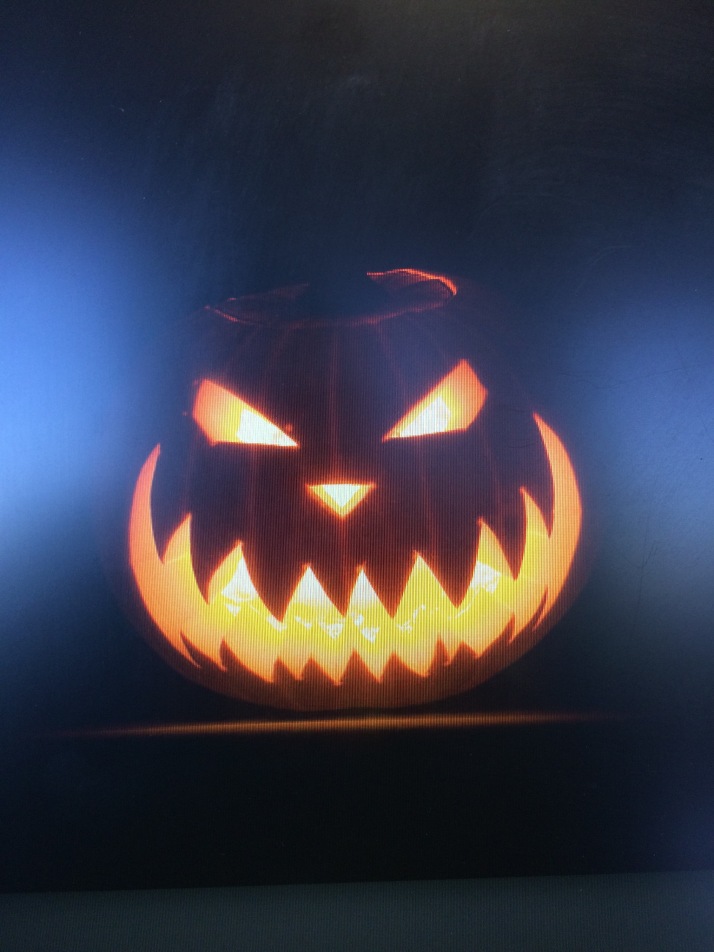 Hi, thanks for inviting me to be on your blog and giving me a chance to meet your blog readers. Waving hello to everyone!

It’s October and it’s my favorite time of the year. I love the fall colors! Okay, I also love the winter colors and the spring colors and the summer colors, but there’s something about the autumn that is extra special. And we polish it all off with Halloween. Don’t laugh, I love decorating with pumpkins but I dislike jack o’ lanterns when decorating. Maybe it’s the waste factor? I can keep a pumpkin and then scoop it out for pumpkin pie, but not if it’s been carved.

When my girls were little I used to decorate for Halloween, but not anymore. I just decorate for fall. There’s something a little too spooky about Halloween!

If someone had asked me a few years ago about real ghosts, I would have laughed at them. Then I moved into this old house. Well, let me back up. Before moving here, we bought a house that had been on the market for years. The owner had died and no one would buy the house. After we had bought it, I discovered that the owner’s daughter had been shot and killed by an abusive boyfriend in the house.

We hadn’t been in it very long when I’d hear what sounded like someone running across the roof of the house. I still think it was a squirrel wearing combat boots! But I mentioned it to my neighbor and asked if she’d ever seen a squirrel or any animal on my roof. My neighbor then told me about the young woman’s death. She said her father often heard her running through the house. Okay, wild imagination, and I still think it was a squirrel. But then I moved here.

I’ve known folks who live in really old houses and they often tell of ghostly things. But to me, there is a reason for noises. Ghosts are not real – until I ran into them and was forced to change my mind.

We hadn’t lived here long when I’d walk into my darkened bedroom and it was as though a cloud over the bed moved. Granted, I’m tired and the play of light coming through the window… Logical explanation, eyes play tricks on us. Except, I kept losing things.

My husband got more than a little upset with me on a few occasions. And every time he did, it seemed I’d lose more stuff. But when I lost my keys, it really escalated. Probably everyone has put keys down and forgotten where they have left them, but when my girls were little, I found a jailor’s ring key chain. I loved it! I could slip it over my wrist and wear it like a bracelet when I was out and when I had returned home I would put it on the doorknob. I was totally obsessive-compulsive with my keys. Losing them was a big deal! Not only had I lost the keys to the house, but I’d lost my key to my car and the one to my husband’s. In this day, car keys are very expensive because they either contain chips or they have that electronic fob with them. My husband’s had a chip and mine had a fob that opened my car doors, etc.

Hubby finally helped me look for them, after he blew off a little steam over my being careless, scatterbrained, etc. Then all sorts of things began to happen. Oh, come on. Who loses the basket in the coffeepot? Out of desperation, I asked him to get into the car and we drove to a nearby shopping center where I tried to explain to him that every time he got upset with me, even when he wasn’t really upset and just voicing his frustration, more things vanished. When he thought about it, he realized I was right.

We moved bookcases, etc. in an attempt to find the keys. They were gone! Determined that they would show up, we avoided buying new keys for the cars. Then one night while sitting in the keeping room eating dinner, we discussed the fact that they had been gone for almost six months and still had not reappeared. They needed to be replaced. I was going to call the locksmith in the morning and have them made. I knew the combination would probably run close to two hundred dollars, but living without a second set of keys to the cars was probably dangerous. My husband agreed. It was a chunk of money from a budget that couldn’t afford it.

My husband left the table and went to watch some TV in the living room while I cleaned up the kitchen. My hands were in the dishwater when I heard the tinkling of keys by the back door. I looked over and there was my key ring swinging on the doorknob. “HONEY!!!!”

Suddenly, the idea of a ghost was no longer funny. My husband looked at the keys and asked where I found them. I told him I hadn’t. I was just washing the dishes and heard them. I’m not sure he believed me.

Shortly after that incident, I heard a strange noise as I cleared the keeping room’s dining table one night. I stopped and looked across the foyer to the living room.

On the other side of the living room doorway, I have a 4-door cupboard where I keep seasonal items for decorating along with a handy supply of candles, a flashlight, and some other general clutter. I couldn’t imagine why my husband would be going through that cabinet. I stood there just watching him. Finally I opened my mouth. “Honey, what are you doing, and where did you find that old plaid shirt?”

He didn’t respond. I shook my head, put the dirty dishes into the sink, washed my hands, and went to investigate. I didn’t see all of my husband, only part of his arm and shoulder. Enough to recognize that horrid old wool shirt that I swore I ditched years ago. Nor could I understand why he’d wear it when it wasn’t that cold.

Hubby wasn’t in the living room. I heard water running upstairs and followed the sound. “What were you…”

A few moments of conversation and we both went downstairs to check the cabinet. Yes, stuff was missing, starting with the flashlight. But that ugly shirt became my clue as to who my ghost was. Little pieces began to come together. My ghost liked my husband and hated me. I seriously think he tried to run me off. It was always my stuff he stole. And he seemed to enjoy creating problems between my husband and me. But he really enjoyed driving me nuts, and he was doing a good job of it.

One morning after my husband had left for work, I went to make a cup of tea and my infuser was missing. We all have our favorite items, so slightly upset I opened the cabinet to get another one and those were missing. I didn’t even have an infuser for a teapot. Gone! Not in another cabinet, or drawer or anyplace that I could find. Not a single one turned up anyplace in the house.

After I huffed a few times, I decided I’d had enough of this ghost’s games. I’ll spare your readers the sordid details of this previous man’s life, and leave it with he was quite wealthy but had some issues. But he was the most likely possibility as a ghost in this house as there were several matching pieces of the puzzle that pointed to him. So I did what any normal person would do. I stood in the middle of my living room, called his name, and scolded him with all the skill of the meanest drill sergeant. I told him to return everything he had taken. Then I left.

I met my husband after work and we returned to the house together. My infusers were tossed across my stove. Several flashlights reappeared in the living room along with a variety of other things. My husband just shook his head and looked at me. I’m not certain he really believed me, but there was no question in my mind.

That ghost lingered until after my husband died, and then vanished. That has left me with one little whirling dervish that seems to giggle, and then vanish into the living room fireplace. I’m really not certain what it is, but the animals in this house watch it. The other day, I realized that I hadn’t seen that giggling, spinning ghost in quite a while.

People don’t talk about such things. Non-believers seem to think they are superior, and if we see such things, then there must be something wrong with us. Please believe me, I’d much rather I never encountered that ghost in this house. I wish my keys had not vanished for six months or been returned in such an unexplained way. I wish my tea infusers had remained where I had put them, along with my flashlights, and all the other things that kept vanishing. I only know what happened and what I saw. But for those of us who live in these old houses, ghosts stories are common.

So Happy Halloween to those who love the holiday. I love the season but I really don’t want anything to do with the paranormal! I prefer to keep the holiday light-hearted and fun. With our neighborhood free of small children, no one around here even bothers with treats for children, except for a new family that has just moved in and I think those children might be too old to trick or treat. So I’m planning to buy a bag of apples and the kits to candy them. I’ll take that to their door and tell the teens to have fun making candied and caramel apples.

Would you believe I wrote a book that involves Halloween? I promise, it’s not spooky and it’s more of autumn story as it goes through November and a little beyond. It’s about a second chance of finding love especially when having been burnt the first time – it’s often hard to trust again. 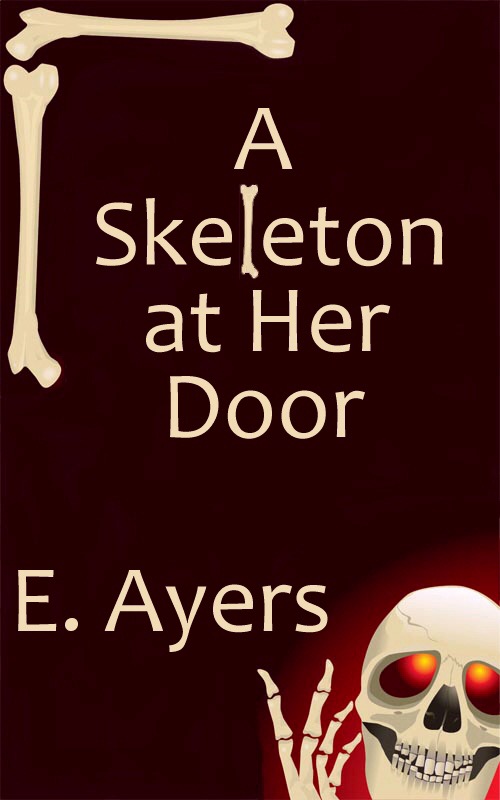 When Tom shows up dressed for a Halloween charity auction at the wrong door, he has no clue his life is about to change. Angie thought the skeleton standing before her was her neighbor until her young daughter informs her that the man in costume is not Matt. Add Tom’s two teens, some Chinese fortune cookies, the willingness to try one more time, and it’s the perfect read for a chilly autumn night.

This book has a little sizzle and is not meant for the younger crowd, but it should not be offensive to the average reader. It does contain some adult topics, which includes an ex-wife’s infidelity and a physically abusive ex-husband.

Or read for FREE as a Kindle Unlimited