Today we have Patricia Bond joining us!

Take it away Patricia!

For those of you near the shores of Lake Ontario in New York State, please join me at Murphy’s Orchard in Burt, N.Y. where I will be signing copies of my books on Sat., 2/11/17 from 11:00am to 2:30pm.  I’m very excited to be at Murphy’s Orchard, since it is a designated historic site as a waystation from the Underground Railroad. By happy coincidence, my characters in By Love’s Honor Bound happen to be VERY involved with the Underground Railroad.

By the way, Murphy’s has a wonderful tea room where they serve sandwiches, tea and desserts, as well as a gift shop filled with specialty jams and jellies all made with their own fruits, and so much more….

Come on down! I’d love to meet you. 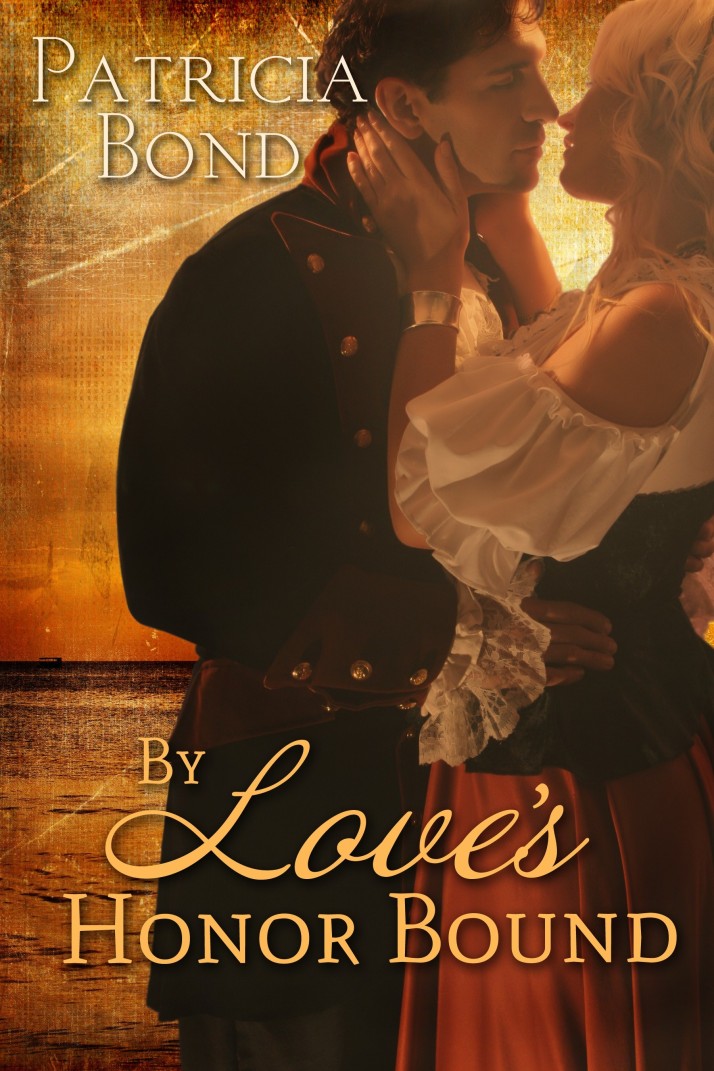 Someone is killing Conductors on the Underground Railroad one by one. With a cellar full of runaway slaves, Olivia June Mathieson must decide – is the handsome Fenton Pierce-Smythe savior or traitor?

Both Fenton Pierce-Smythe’s fiancee and grandfather were killed when runaway slaves spooked their horses. Determined no one else will face that pain, he hunts runaways to return them safely to their owners. But can he remain unmoved by their plight? And unaffected by the beautiful woman who risks her life to lead them to freedom?

He was, he admitted grandly, ever so slightly foxed.

Hell, what would you expect after spending the entire evening in a tavern drinking cheap whiskey? As he stepped outside, the cold night air struck him in the face like a loose sail, and he knew he’d have a devil of a headache tomorrow.

And for what? The night had been an abysmal failure. He hadn’t found out one thing about the Underground Railroad here. Nor had he heard anything about any runaways. It had been a total waste of precious time, except perhaps for that blond.

He smiled as he walked unsteadily to his horse, thinking of the girl. She’d been eye-catching, no doubt. The memory of her silken speaking voice washed over him and he found himself thinking of the “O” her mouth had made when she’d poured the coffee on him. The soft pucker just begged to be kissed.

But, that coffee! He grimaced as he ran his hand over his thigh and the front of his trousers. They were dry now, but he was still a tad tender to the touch. Thank God he’d been quick enough to escape most of the hot liquid.

He reached his horse, Thunderbolt. Stupid name for a horse that ran slow as molasses in winter. He’d received the animal for his sixteenth birthday, and had chosen the name with visions of a dashing hero dancing in his head. He’d seen himself riding through storm-tossed nights, rescuing fair damsels in distress, and receiving his loving rewards from them. Of course, he’d been sixteen, and his blood had run as hot and randy as any young man’s.

Now, at the ripe old age of twenty-nine, he’d learned fair damsels seldom needed rescuing. And especially not by a man named Fenton, riding the slowest thunderbolt known to nature.

Damn, he’d never liked his name. Fenton. He snorted, wishing to hell his mother had never read that silly novel. Why couldn’t he be named something dashing like Drake, or historical, like George or Alexander? Or even biblical, like Abraham. At least those were names that engendered respect. But Fenton? For God’s sake!

He swayed slightly while his clumsy fingers worked to untie the reins. With a wry smile, he admitted to himself that having that name taught him a lot about self-defense. He’d had to fight his way through school from the time he wore short pants. Still fumbling with the reins, he wondered if his young temperance singer could give herself to a man named Fenton.

Testing the sensitivity of his thigh again, he found he could touch it almost without pain now, although even in the dark he could see a definite stain from the coffee. He’d had to put up with a lot of ribbing in the tavern. His fellow drinkers had made numerous comments regarding his ability to control himself around beautiful women. It had taken all his control to laugh along with them instead of smashing in a face or two.

After several frustrating minutes, he finally managed to loosen the reins. He didn’t remember leaving them in such a muddle when he’d gotten here. Someone must have been playing a joke, he decided, untangling the leather from around his fingers.

He led the horse to an open area, lifted his foot to the stirrup . . . and missed. Thunderbolt nickered softly and Fenton patted the animal’s neck. “C’mon, Bolt. There’s a good boy.” He felt the first drops of rain start to fall. Great. More rain. Just what he needed. He didn’t care at all for the idea of riding the thirty miles back to Baltimore in a rainstorm.

He raised his foot again, and missed the stirrup a second time. “Dammit, stand still!” he hissed in an annoyed whisper.

Thunderbolt turned his head and snorted into his master’s face.

Fenton was ready to try once more when he heard a vaguely familiar feminine voice raised in entreaty coming from just up the road. She sounded as though she were in trouble. Had some rogue accosted her, trying even now to have his way with her?

Thoughts of rescue and rewards sprang to his mind. He dropped his reins and slogged as fast as he could through the mud left by an earlier rain, plotting his attack on the ruffian as he went.

The sounds were coming from a modest buggy stopped under a bare-branched tree.

Fenton ran around the side and threw himself into the vehicle, landing in a soft lap.

Livvy would have screamed, had the man who leaped into her buggy not knocked all the air from her lungs. As it stood, she was just barely able to hold onto her reins. “What are you doing?” she finally demanded, shoving him off to the side.

“Saving you. Where is he?” Fenton looked around the buggy wildly, his eyes searching the darkness.

“Where is who? There is no one here but the two of us.”

“You sure?” he asked, squinting at her.

“And Rosabelle,” she said, indicating her horse.

“But I heard you. You were begging to be let go.”

“Stuck?” he asked, his face a study in confusion.

“In the mud,” she said with great deliberateness.

“Oh. Well then, let’s have a look,” Fenton said, hopping down from the seat and stumbling only a little as he landed. He walked around the back of the buggy and peered through the darkness at the wheels. “Everything’s fine here.”

He came around the front and studied the closest wheel. She could see him sway as he stood. The odor of cheap whiskey she’d smelled when he landed on her wafted up on the night wind. Finally he looked up at her, grinning.

Livvy rolled her eyes heavenward before answering. “And you, sir, are drunk.”

Arms of an Angel:  Amazon 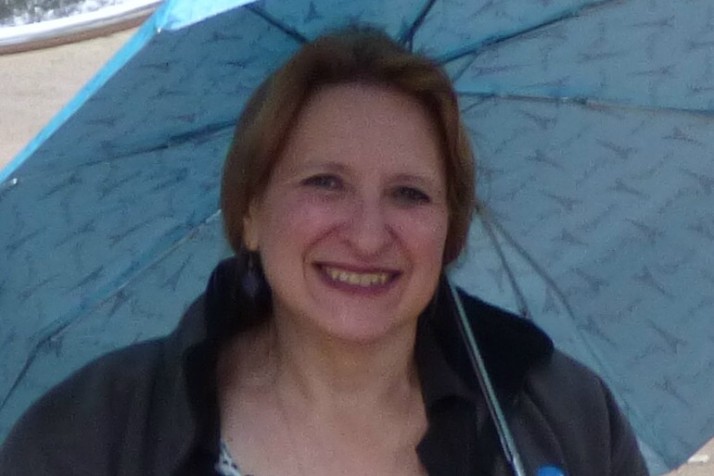 Books, history, hooped skirts and happily ever after.  Those are just a few of local author Patricia Bond’s favorite things that she weaves into stories.  Add in a dashing hero and an intrepid heroine and you’ve pretty much got her recipe for a historical romance.

America’s history is so rich and full, it serves as a natural backdrop for her books, and she tries to take full advantage of it, along with its incredible landscape. Her settings have run from the Great Lakes, to rural Pennsylvania, to Baltimore/Washington and the Chesapeake Bay.

Wife, mother, and grandmother, she loves being retired and living near the Great Lakes where she’s free to indulge her other passions besides writing. An award-winning amateur photographer and member of the local knitting guild, you may find her at the lakeshore, notebook in hand and camera at her side drawing inspiration from her amazing surroundings.