BOB AND THE POLKA-DOT HIGHWAY

Book 3 of The Bob Books

Poor Roz…once again stuck on the horns of a dilemma. Does she accept the great offer for a job that’s hundreds of miles from Crooked Lake? Or does she pick David, the great guy who grows grapes half a mile from her house? And either way—assuming our crabby woman-of-a-certain-age manages to make a decision—what about her ghost, Bob?

Granted, Bob and Roz have never had a … ummmm… ‘traditional’ relationship but still, martini-loving ghosts don’t toddle along every day of the week. What happens to the wit, the sparkle, the laughter?

Join Roz, David—and Bob—as they spend a beautiful, but confusing, summer on Crooked Lake. And oh, by the way, watch out for drips…

My ghostly guest, Bob, swirled his drink while the late afternoon sun streamed across the kitchen, lighting the martinis on the table with an otherworldly glow.

Outside the kitchen’s picture window, Crooked Lake nestled into dusk. Even though it was only early May, a determined fly fisherman drifted in the center of the lake, casting for dusk-feeding trout. Gentle waves splashed against the rock wall I’d struggled to build only a couple of months before. Enough water had drained off after the spring floods that I once again had an actual beach and I planned to spend the summer shoveling shale to enhance and deepen it.

I glanced at Bob, my ghostly companion of many months, as he sipped his drink. I’d gotten to the point where Bob didn’t intimidate or scare me at all. In fact, if it came to being crabby, unpleasant, and maybe even a little scary, I had him beaten by a mile. (I’m not proud of this, mind you. But I do try to call a spade a spade. It’s one way to simplify what seems to have become an awfully complicated life.)

Despite the small spare tire Bob sported around his middle and hair that, in the right light, might be characterized by some as thinning, Bob prided himself on being a suave and debonair ghostly figure. He had nothing but disdain for those immature spectral bullies who throw furniture around and make their hauntee’s lives miserable. I don’t think, now that I focus on it, that I’ve ever even heard Bob raise his voice. (He would not be able to say the same about me, I’m afraid. Not that I have anger management issues. I mostly have crabby management issues.)

Lately Bob has spent his time wandering around the house in a gentle alcoholic fog, babbling about whatever topic he’s fixated on that day. Sometimes it’s the value of 5000 hedgehogs; other days, he’ll get obsessed with his bird phobia or government conspiracies to wear out shoes, or he’ll fret about wearing a white suit. I’ve become used to it. In our early days, we’d only get together at dinnertime. Now that David’s not spending any time at my house, Bob stops by much (MUCH!!!) more often.

Although the soul of ghostly gentility himself, Bob tends to hang out with what I might diplomatically call a challenging sort of crowd, the Algonquin Round Table in Manhattan. I’d visited his friends at The Algonquin hotel a couple of times and the word ‘surreal’ pops into my mind every time I try to describe the experience. Fortunately, though, his ghostly buddies hadn’t found their way from midtown Manhattan out to my isolated lake house in western New York. I planned to keep it that way. 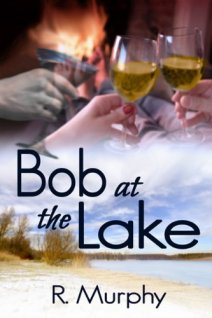 Bob at the Lake

What would happen if Roz, a crabby woman of a certain age, moved to the wintry shores of a New York lake—and got a ghost? And not just any ghost, mind you. Bob’s a ghost from 1920’s Manhattan, full of quips and over fond of his martinis, who swans around in a silk smoking jacket and makes Roz’s life very . . . well, let’s just say ‘complicated.’

Especially after Roz meets David, the good-looking grape grower who lives up the hill. Join Roz, David—and Bob—as they navigate blizzards, cookie mazes, holiday shopping sprees, and the occasional power outage. (You know, all of those delightful challenges of a good, old-fashioned Northern winter . . .) 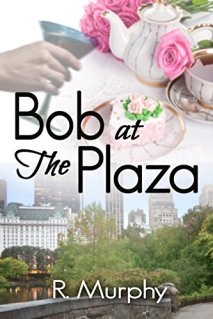 Bob at the Plaza

What a winter it is! Record-breaking snows followed months later by record-setting rains. Ah, the joys of living on a lake shore when the spring floods arrive.

Undeterred by mice, sociopathic relatives, Carnegie Hall disasters, and spring floods, Roz searches for her MIA ghost. In the process she goes toe-to-toe with the hyper-verbal crowd at the Algonquin Round Table. Can Roz best smarty-pants Dorothy Parker in a game of wits? Will Harpo Marx finally speak out and help Bob return to Crooked Lake?

For the answers to these and many other spirited questions, read BOB AT THE PLAZA!

Roz Murphy is the pseudonym of a long-time Finger Lakes resident who lives with ghosts and doesn’t want to confirm in her neighbors’ minds how nutty she really is. (They already have their suspicions.) After decades of writing in Manhattan and throughout the country, Roz settled on the shores of New York’s Keuka Lake, some of the most beautiful country ever created. She’s an ardent fan of the Finger Lakes wine industry, especially the local dry Rieslings.