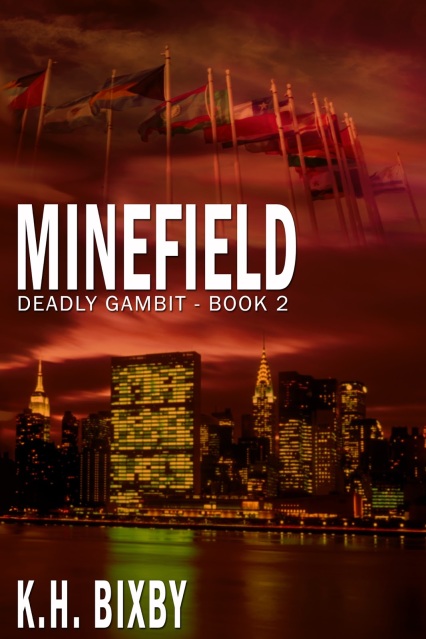 Complications mount when Sam Turan agrees to work part-time for Heidelberg Bank and dedicate the rest of his time to rebuilding his homeland in the Middle East. Conspiracies and plots threaten his relationship with the Adler heiress and attempts to blow him up escalates the danger level. Sam can only trust a handful of friends. With the ground shifting beneath him, is anyone what they claim to be?

Both Sami and the agent returned to the living room and Sami handed Cassidy the sweeper. “Here. Take this. See for yourself. The ambassador can verify there weren’t any bugs last night as he was here when I swept the place after getting home from talking to you at the airport. I’ll look for physical evidence and for Jazzy-cat.” He pulled over Agent Cassidy and whispered to him, “I do have a closed-circuit camera system. Cameras are in the ceiling moulding. Unless they found it, I should have an image of who planted the spyware.”

Cassidy looked over at Stills and gave a nod. The man pulled out his phone and called for a tech to clean out the spyware. “We’ll look, but our team will have more sophisticated equipment. They will be here shortly. Let me know if you see anything odd.”

Jazzy was Sami’s next concern. With the new furniture, her hiding places had changed a little. He looked behind the potted plants and stepped out to check the balcony as the cat door provided an exit to the small outdoor space. In the past, she often hid under the old easy chair. It’d been replaced but since it had been her habit, he got down on his knees and began to peer under the sofa and chair. She wasn’t there but something else was.

Blood drained from his face as he slid back. Cassidy had been watching him. “What? Your cat?”

“Bomb, I think,” he said in a weak and shaky voice.

Uprooted from the violence of his homeland, Sami Turan leads a sheltered existence in New York until an explosive encounter with a family member brings back to the surface all he’d lost. On a mission to right a wrong in the best way he can think of, he discovers monsters wear many masks.

Trying to correct his ill-conceived actions, he inadvertently nudges out of balance the first domino of an overlooked international conflict.

Will his actions help his homeland or will he end up starting the next world war? At what price? And will the monsters he exposes in the process be obliterated?

As a person who views news and politics with the fascination of watching a train-wreck, Bixby is driven to extract what IS discussed and twist it into the light of what ISN’T.

Writing fiction, but keeping it within parameters of the believable and possible, K.H.’s thrillers grab the reader, causing them to wonder … is the story real?