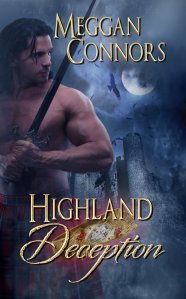 When Kenneth Mackay, long-banished rogue and thief, returns to the Mackay holding at the request of his brother, he has no idea what he might find. He certainly doesn’t expect to be confronted with his twin’s imminent death, or with the plan his brother has concocted.

Ten years before, Malcolm made a tragic mistake, and, to preserve the family name—and his own skin—he allowed Kenneth to take the fall. Now that he is dying without an heir, Malcolm plans to atone for his mistake: by giving Kenneth his life back. All Kenneth has to do is assume his brother’s identity. But complicating matters is the unexpected return of Lady Isobel Mackay, the daughter of an English marquess and the wife Malcolm didn’t want.

Isobel barely knows the husband who abandoned her even before their marriage, and she’d long since given up hope on having a real marriage with him. Yet when she returns to the Mackay holding far earlier than expected, she finds her husband a changed man. Despite the hurt between them, Isobel’s heart responds to this man who cares for his entire clan as if there were family. Who, for the first time, cares about her as if she is, too.

Falling in love with her husband had never been part of Isobel’s plan. But when their future is suddenly in peril, Isobel must find a way to save him—from himself and from the deception threatening to tear them apart.

She ignored Grant’s angry protests behind her and ran for her husband’s bedchamber. Slamming open the door, she stumbled inside.

Alone. She tried not to speculate about what meant.

His breathing was shallow, as if he’d been running. As the door bounced back and closed, his sky-bright eyes shot up and met hers.

No, not sky-bright. Darker, the color of the forget-me-nots that bloomed in the gardens in spring. The color of the night sky as it lightened with the first rays of dawn.

“Milord.” She gasped for breath.

Malcolm had never looked at her like he did now. This time, when he studied her, it was as if he didn’t dislike what he saw.

Being honest with herself, Malcolm had never disliked her. After all, the term dislike implied a depth of feeling he almost certainly lacked.

Grant was suddenly at her back. “Sir, I apologize. She’s faster than you’d think.” He laid a hand on her shoulder, as if to steer her from the room.

She shook him off.

“Indeed.” Malcolm smiled, and a charming dent in his cheek appeared.

How had she not noticed that before?

“We will leave at once.” Grant took her by the arm.

She wrenched out of his grasp. “I’m not going anywhere. Not until I have my audience.” She glanced around the room and saw no sign of Malcolm’s mistress.

Malcolm held up his hand. “‘Tis fine, Grant. I can always make time for my lady wife.”

“Are you certain?” Grant’s eyes shifted from Isobel to Malcolm and back again. A wrinkle formed between his brows, and the muscle in his cheek worked as he ground his teeth together.

He’d only ever done that when he was agitated or anxious.

But there was no reason for that, as Malcolm had never truly cared enough to keep secrets from her in an attempt to spare her feelings. Nor had he ever forced others to do the same.

Malcolm’s eyes met Grant’s, and something passed between the two men. Her husband gave Grant a clipped nod. “If you’ll excuse us, Grant.”

Grant released his breath slowly. His eyes narrowed first at Malcolm, then at Isobel. Scowling, he bowed his head. “Mackay,” he said stiffly. He turned to Isobel. “Lady Mackay.”

Isobel watched him go then waited until the door had closed behind him. “So, where is she?”

Malcolm arched a dark brow. “Where is who?”

He lifted a single shoulder, as if she didn’t have a right to know. “I doona ken.”

The silence that fell between them was deafening, damning.

Finally he said, “Your arrival was unexpected.”

She breathed a mirthless laugh. “I have no doubt.” She expected him to look ashamed, but his expression didn’t hold even the slightest hint of remorse. She swallowed against the betrayal rising in the back of her throat and tried again. “Why are you abed?”

“I’ve been ailing. Naught to fash yourself over.”

She approached his great bed tentatively. “Ailing how? Has your cough worsened?”

He glanced down at his coverlet and then brought his gaze back to her face. “For a time, aye. I believe I’m on the mend now.”

Isobel pressed her hand to his forehead, then his cheek. His skin felt cool beneath her palm, if a little damp.

His breath hitched, then he cleared his throat. “Satisfied? As you can see, I am on the mend.”

“Perhaps,” she whispered. She ran her hand around to the back of his neck, then descended to his back.

He wore a thin linen shirt, unsuitable for the cool nights of the Highlands in late fall. She placed her hands between his shoulder blades. He was thinner than she remembered, but there was no mistaking Malcolm’s unique strength.

“Breathe,” she said, and then reminded herself to do the same.

“If you want me to leave you be, you will appease my curiosity. Breathe.”

Malcolm tilted his head up and studied her.

She fought the desire to look at him for as long as she could before meeting his gaze. Her heart skipped a beat as she saw something in his eyes she hadn’t seen before.

“Breathe, milord.” Heat spread up her neck to her face, and, to keep her free hand from shaking, she clenched a fist. The warmth of his body seeped through his nightshirt, scalding her hand not with fever but with something else.

The corners of his lips tilted upward before he smoothed his features. He paused for a moment too long, then held her gaze as he took an extended, deliberate breath.

She shoved the raging emotions aside and forced herself to view him as a person who needed her help.

She felt no hint of the cough that had been nagging him before she’d left.

Swallowing hard, she slid her hand between the linen and his skin, against his chest.

His heart rate kicked up.

“Breathe.” She struggled to force the word out.

I feel nothing. Nothing. He needs my help.

She closed her eyes and listened to his breathing, feeling the rise and fall of his chest beneath her hands, the steady beating of his heart. His skin scorched hers.

Her mouth dried, her tongue thick and heavy. She removed her hand. “You seem to have mended nicely.” Even to her own ears, her voice sounded strangled.

His gaze searched her face. “Aye.”

Isobel cradled her hand against her chest and stepped back from the bed, nearly tripping over her own feet. “I will leave you now, sir.”

“I—I will be in my chambers should you require me.”

He didn’t laugh, as he normally would have. “Then I shall find you there if I do. Or I will send for you.”

She backed up a few paces, bumped into a trunk, and immediately turned her attention to her skirt, trying to smooth wrinkles undoubtedly permanent from long days of travel. It was better than looking at Malcolm.

“By your leave.” Her eyes locked on the floor as she dipped into a hasty curtsy and fled.

The moment the door closed behind her, she put her back against the cold, stone wall, cradling the hand that had touched him as if she had injured it.

She’d touched his skin, felt the heat of his body, and the responding heat of hers.

He hadn’t forced her hands away. He hadn’t mocked her.

Instead, for the first time since their marriage, he’d called her wife.